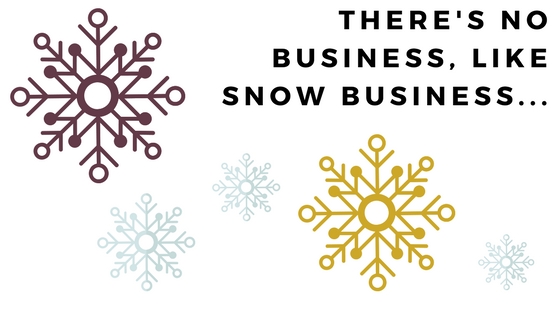 I would like to start by saying how lovely it was to have a blanket of crisp white snow descend on Parklands B&B and London in general. It has been several years since the last dusting which lasted all of 36 hours.

Snow just makes everything so much prettier. It lightens the dark evenings whilst intensifying the lightness of the day. Paul, I and Sally all love the snow thanks to our many ski trips to France and Italy. The garden plants bent over like old men, the crunch of the stones was replaced with the creaking sound of shoes on snow.

But as with all good things, it must come to an end. The snow has fully melted around us and, in its place, we have many a burst water pipe flooding our high street or no running water at all!

I have to admit we did not notice thanks to Sally’s thinking ahead. She installed a 500-litre reserve water tank in the cellar several years ago. The reason for it was two-fold, first to ensure that we always had water, second so that all 5 showers in our B&B can all run at the same time without losing pressure.

It is little things like this that you just don’t think about until something goes wrong or worse you get a complaint from a guest. It is planning like this that you realise how good Sally really is at anticipating a problem. I have personally found this to be half the battle in hospitality……. always be prepared for every eventuality.

Take two weeks ago, we had three ladies turn up for a room, which was booked for a single person. First, they tried to claim that it was not their mistake and second they had turned up on the wrong day. Sally spent an hour with them sorting out another place for them to stay. We then told them to cancel the booking and we would waive the cancellation charge but they didn’t, so we had to do it otherwise we would have been charged commission unfairly!

There have been many quick thinking moments in the past, but even with all our experience you can still get flustered and it does dent your confidence. Luckily most of our guests have been great this past month except one!

Let’s just say, he knows who he is, and we will not be welcoming him back to Parklands – he sneaked out of the B&B without paying and we have no address for him as he booked via an OTA and his credit card passed the first level of security. We have since still not been able to charge him for the night and he got very aggressive over the phone when we challenged him.

What really takes the royal biscuit, we are being charged by the OTA the commission for his stay. It’s totally unfair! I told Sally to refuse to pay it until our complaint it registered by bookings.com, they call us partners but they hold up their hands and refuse to take our viewpoint into account. They won’t even blacklist the guest so he cannot book us again in the future.

It’s the risk you run when serving the general public. But as always, I don’t like to leave things on a bad note, so here are a few pictures of Parklands in the snow!

It may be another few years before we get to enjoy such a sight as this again.

As I said on Sunday, we have had an easy week with just three guests…

The Start of Autumn

It has been full on since our last publication, September is always a busy month…