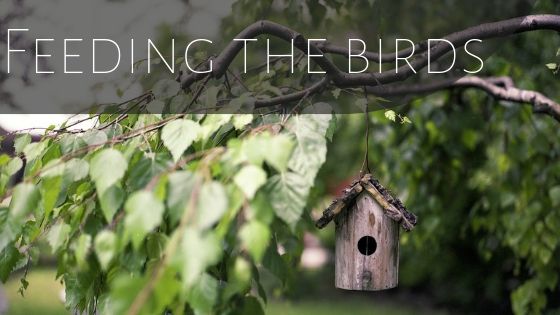 For my birthday back in March, I asked for bird feeders and I was inundated with several including bags of feed.

Typically I forgot to put them out, however at the start of July, when I was clearing out the garden shed trying to make room for (yet more) of my sons things,  I found three of them.

Feeling pro-active, I loaded them up and hung all of them – two on the wisteria tree and one of the olive. It didn’t take long for the word to get out as three days later all the feed was gone.

I was amazed. I refilled them and was delighted to see a swarm of birds dart in and out of the canopies helping themselves. I was a bit alarmed when two big fat pigeons turned up but they had to make do with picking up seeds from the floor.

With Purdy occasionally chasing after them.

For 4 weeks non-stop I have been refilling the bird feeders and there are on average now at least 6 birds or more a day paying my garden a visit. Even the guests have commented that they have never seen such a variety of birds in one place – they mostly only see a posy of pigeons!

Apart from the hottest day of the year last week, the weather has been lovely. It certainly puts the guests in a good mood when the sun is shining. In fact it encourages them to get out of the house quicker which means   the cleaning can be done quicker and I can then have more time to get other things done.

There is nothing so annoying as being in limbo, waiting to get on with your main tasks of the day, which are also the most time-consuming!

I have also invested in a new ALL IN ONE cleaner called KOH! It arrived yesterday morning along with a diamond scrub and cloths. And I can tell you… combined with the scrub my pans have never been cleaner.

It managed to get the black grime accumulated over the last 10 years off completely – they almost look brand new! One of the best aspects is that it doesn’t smell either. It is literally water mixed with minerals.

My only gripe is that it was invented by two Aussie lads rather than us girls who (on the whole) spent more time around cleaning materials than they have. Otherwise I highly recommend it!

Well that is enough from me, I wish you all a good rest of your summer.

November has whizzed by…