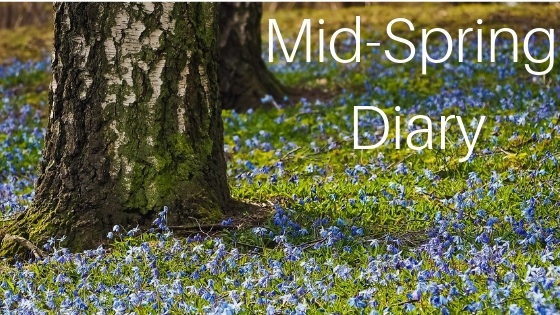 We had a contingent of Germans come and visit this month from the north as well as the south, one was a family of three the other was a mother and daughter visiting London for the first time.

They all chatted away with each other around the breakfast table, which makes my job as a host easier as there is less need for me to have to broker a conversation.

The late Easter this year, caught us all unawares but it is always nice to enjoy a long weekend and for the first time in a long time we were less busy and so I took the Easter Monday off and became a tourist for part of the day and went to Tate Britain to view the Don McCullen exhibition.

April is the month when time is spent clearing the garden, re-potting all the plants and doing a general tidy up now that the weather is more consistently warmer. Paul has also been busy planting an array of beans, chili’s, cauliflower, spinach, and herbs so that we can use them for cooking. He has been testing out different vegetables over the last year to see which seem to grow best and most effective in the garden.

May is looking busy already with an international score of guests due to arrive, it is also one of my favourite months in London as the flowers return and the grass is a lush green once again.

On the fitness front – I bought a rebounder and have already tested it out, clocking up over 200 bounces in one session…  It was weird, to begin with, feeling everything giggling and juggling but as soon as I was off, I knew I would be straight back on in a couple of hours eager to beat my previous record.

I shall keep you all posted,

Spring is in the air… 8th April

We have had guests recently who really enjoy a hearty breakfast, so to keep it…

What a few days it has been!! First thing first - Sally unfortunately had a…