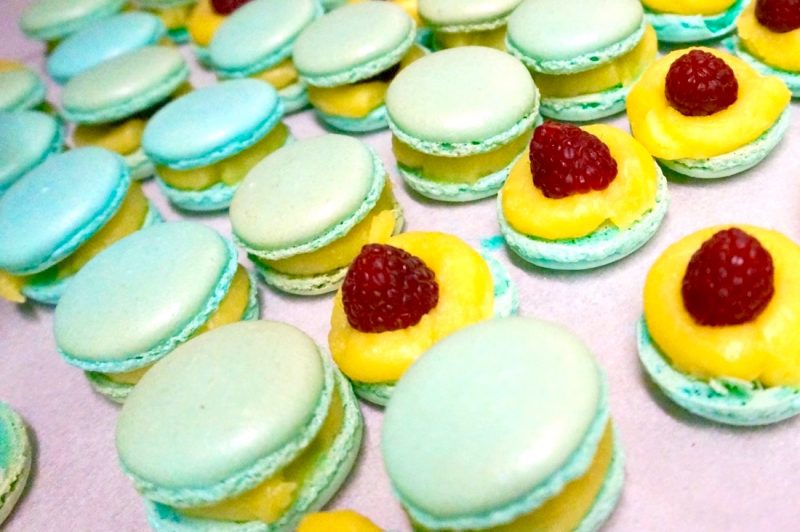 I met the charming ladies from The Whisk Fairy at one of my local fairs and although I ‘thought’ I didn’t like macaroons (I’m reliably informed that those in the know refer to them as macarons), I was really intrigued by some of the flavour combinations on their stall.  I’ll try anything once, and boy was I stunned!  They turned me around with the first crazy mouthful.

Only too happy to oblige, they agreed to an interview for our We Love Local series in their kitchen, and I convinced Sally to come along for this one as I knew she’d love what they were doing.  Off we trotted one rainy evening to meet the duo and find out more about what goes on in their heads…

How did the two of you meet?

(much giggling) Helouise (H) – We met at work! We worked together at Kings College hospital in the research lab. Leilani was the only person I could fully understand.  Because I had come directly from the States, so I was used to the accent.  It was so embarrassing for me, not to be able to understand anybody!

How did the idea of The Whisk Fairy come about?

H – That’s a really good question, so I was baking on a regular basis for people in the lab, and everyone was asking me for my recipes and someone suggested a blog.  So one day I decided – ok I’ll do a blog but I had no idea for a name, so I thought ‘what am I doing, I’m doing magic’, I don’t have a wand but I have a whisk! As stupid as it sounds, that’s how it came about.

Leilani (L) – The idea for the Whisk Fairy as a company came about because I was at a friend’s wedding in Cambridge and the cocktail bar closed, we were all hungry but I couldn’t find any late night food.  I had a brainwave with my best friend and said ‘we need to do a fried chicken truck and we need to do it in Cambridge’.  Some time later we went back to Cambridge for a meeting, and the more we thought about it, we realised that there was a lot more to it than just getting a truck, and we were back to the drawing board.  A little while later my friend asked Helouise what she was doing and then we all had the brainwave to do savoury macarons!  By the end of the evening we were yelling out flavours ‘fried chicken macaron’ ‘grilled cheese’!.. and I said ‘stop, someone is going to take our idea’!

Did you try the fried chicken flavour?

H – We have done a confit flavour.. its’a bird, similar!

You’ve chosen quite a specialist product, why macarons?

H – The big fashion for macarons in France was in 2007, that’s when I started making them and then it went down.  We noticed there was nothing here in England and not many people making them apart from the big macaron houses, but nothing at a more affordable level. So we thought there was an opportunity for us to enter this market.

With it being such a specialist product, It must help that the two of you are scientists because your minds work in a very precise way.

H – Baking is a science and you need to be really precise when you measure your ingredients and the way you manipulate things, like sometimes you should not stir and sometimes you should, because you might change the molecular structure, and you’ll have crystals when you want to make syrup..

L – All the weights and measurements have to be spot on, because if we add slightly too much Baileys to a mixture, then we ruin the whole thing.  We want our customers to have the same taste each time they buy from us, so continuity is important.

Where does the inspiration for your flavours come from?

L – When we first started we thought about what was familiar, but also what’s really ‘out there’.  So the flavours like red berries, chocolate etc. are familiar flavours, and then we wanted to do flavours that set us apart, so that’s where the savoury and alcohol flavours came in… Limoncello, Baileys, Duck confit, Fois Gras, all things you wouldn’t think to put in a macaron, but we thought we’d try it anyway.  Also Haribo flavour!

H – She has these crazy ideas and then forces me into trying it!  Over Christmas we had a conceptualisation time where we think about testing new flavours.  We’re also open to suggestions, so we took ideas from friends in brainstorming sessions, which really helped.

L – When we’re selling at the market someone might come up to us and say they want to try Margarita flavour, and we’ll give it a go if we like the idea.

H – Yes, for example, the duck confit idea is actually my boyfriend’s idea, so we gave it a go, and wow!

What are your baking ‘bibles’?

H – I don’t really have a ‘bible’, I like to get inspiration from the internet and different places.  I do have a favourite book which is Pierre Herme Ispahan.  My mum gave me this for my birthday.

Give me three words that sum up The Whisk Fairy?

What does each of you bring to the partnership?

H – I would say I’m the creative one, even though I rely on science.

L – I’m the everything else!  Helouise will make it and I will sell it. Organising, marketing, business development, all that behind the scenes stuff.

Can you tell me about any hideous flavour disasters?

L – Yes! We tried olive tapenade.  We thought it would be amazing but it was disgusting.  We also got mixed feedback on our blueberry and white chocolate flavour, so we had to adjust the recipe to make it better.  We’re making that one today!

We break so that the ladies can start their macaron making process….

I’ve had the pleasure of trying a few of your more adventurous flavours, which I have to admit I was reluctant to try because I couldn’t see how they could work in a macaron. But the innovation and quality of the flavours blew me away. How much testing goes into getting the flavours and combinations perfect?

L – We conceptualise them, we have a brainstorm, then we go to the kitchen and usually have one baking session and we’re good to go.

H – When we have our first tasting session, at times we need to adjust something but after that it’s usually the finished article.  I come with an idea, I write it down and then try it.  I approach it in a scientific way.  Also I’ve been cooking since I was 4.  My first cake.. I was 4 years old.

The perfect macaron is hard to master, how much science is ‘really’ involved?

L – It’s almost like we have to be in a controlled environment.  So we have to make sure it’s a clean room, not too hot, not too much moisture, we then weigh out exactly what we need for each batch, not over, not under.. it has to be exact.  I almost feel like I’m back in the lab doing an experiment.

H – It’s exactly like being in the lab but you can actually eat the result! There’s a lot of science.  In fact we started out using a professional kitchen, and when we switched from there to my home, we had to re-learn everything as the kitchen was smaller and the environment was very different.  The first few batches we made were terrible.  In the professional kitchen we could have things on the hob and in the oven at the same time but here that isn’t possible.

When you are hosting at home, do you try out your creations on your guests?

L -Yes, all the time!  We’ll take them to the lab and get our colleagues to try the different flavours out, which is great because there are lots of different nationalities to give a broad range of feedback.

Is there one flavour that everyone universally loves?

(The oven buzzer goes and the ladies rush to remove the trays of macarons..)

What are your favourite flavours?

You both have day jobs. How many evenings are you macarooning?

Apart from science and macarons, do you have any hobbies?

L – Marathon running, cross training, travelling.  I’m going to the Phillipeans soon for a couple of weeks because my Grandma is turning 90.  So we do take our breaks, to save our own sanity.   But knowing our breaks are going to happen, we’d prepare things, making sure we have enough stock etc.

H – For me, my hobbies I’ve stopped as I’m so busy.  I used to teach Sweedish Fit, which is a mix of aerobics and muscle building, to music, it’s great and is accessible to everyone.

What’s next for The Whisk Fairy?

H – Liberate!!  Me from my day job! So that I can concentrate full time on The Whisk Fairy.

L – We started in May 2015, and we’ve found that the food markets seem to be the most successful for us, so we’re concentrating on them.  We’d like to do a macaron and wine pairing, possibly back in Cambridge as it has such a wide variety of people and they’re really up for tasting new things.

L – We’d like to let people know that The Whisk Fairy are all about accessible macarons.  Macarons can be expensive but we make them accessible to all.  We just want to get out there and keep doing it, bringing it to the people.  The Whisk Fairy is ‘accessible sophistication’!

H – Yes we are affordable and accessible. We’d like to continue with our markets in the South London area.  We really feel like we’re part of South London – we started here, and we live here and feel part of the community.

So there you have it.. Authentic French macarons with a London twist!

Sally and I leave with bags of macarons in hand, that we have no intention of sharing with anyone!

We Love Local: Gardenia of London